History of Medicine in America

Cochran was able to get a majority of physicians elected to the Alabama State legislature, and from there was able to pass a law that made the former guild known as the Alabama Medical Association into a branch of the state government with the power to regulate all things pertaining to medicine.This was on Feburary 9th, 1877. Alabama’s success in gaining control was considered to be a great hope to the American Medical Association and its affiliates. It would serve as the model for all states to thus organize themselves.

The medical boards began to slowly introduce new laws that a physician had to first pass by medical exam. From there they added additional requirements that physicians also had to have diplomas from “accepted” medical schools that implemented their criteria. Most of these criteria required that a student go through a much longer education process.

To quote Professor of Anatomy and Surgery at the Philadelphia Polyclinic, Dr. John Roberts, a medical doctor towards the end of the 19th century, as he addressed the Medical Jurisprudence Society in which he gave support for a state-enforced medical examination,

“Such an examination would weed out and keep out of the profession those persons who, though ignorant of medical science, accept professional duties and emoluments, and thus increase the difficulty of an educated physician gaining a livelihood. There are, undoubtedly, too many physicians for the needs of the closely settled districts. Fewer doctors, and better ones, would be a boon to most sections of the state. The state examination would affect both objects.”

In 1877, Illinois was the first state to require licensure to practice medicine based on whether or not a student had graduated from an “acceptable” medical college in “good standing” with the medical board, or to pass an examination. This was the first real policy that was put into effect that caused the free-market place schools of medicine to finally close their doors. The first state to require both a diploma and an examination was Florida in 1889. Medical boards, by this time, for all of the states were eventually established.

Though not completely accurate, this table is a great visual on which states started and ended their Alternative Medicine State Medical Boards. 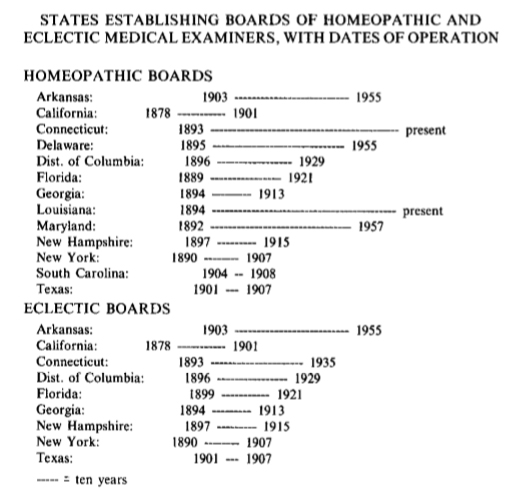 Despite the AMA’s directives, many states let Homeopathic and Eclectics serve on the state boards as minorities. Though, when that was not possible, some states forged their own Homeopathic boards and Eclectic Boards. 14 states and Washington D.C. created Homeopathic boards, whereas eight states and Washington D.C. created Eclectic boards. California was the first state to create either board, and in fact, it created boards of both in 1878, which was over a decade before any other state instituted any similar organization. It was also the first to abolish the practice just 23 years later in 1901.

The longest any alternative medicine boards have remained in practice [up to date] is Louisiana and Arizona. Connecticut came in as a close third, having just closed their Homeopathic Medical Examining Board in 2013.

In the end, the American Medical Association had accomplished its objectives it set out to do back in 1847 when it reorganized after the Civil War. Mainly being the elimination of heterodox medical sects as unwelcome and competitive forces within the profession. This seems to have been attained. Whatever provisions organized medicine had made to include and accommodate the “irregulars” at their request have eventually been all but extinguished.

Get great deals and content sent directly to your inbox!